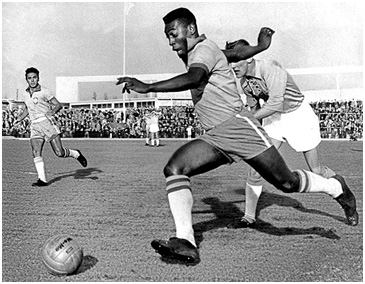 They may be the stuff of legend, and general knowledge quizzes, but ask Pete or Iain about Hulk, Messi, Ozil, Neymar, Klose, Benzema or Fetfatzidis and you’d be met with a stare as blank as the cheque you’d need to write to get them up to speed on the world’s biggest sporting tournament.

It’s early days yet, but news of the England physio’s rather overenthusiastic goal celebration and his subsequent need for, err, physio hasn’t caused so much as a smirk in West Maitland Street’s most internationally renowned creative shop (unless of course you rank Copymade’s cheeky brand of tram baiting badinage higher).

As the Dutch smashed reigning champions, Spain, into oblivion Iain was engrossed in the Times Crossword.  Pete was making some minor adjustments to his manifold.

As Germany was punishing Portugal’s finest, Iain was having a nice cup of tea and Pete was listening to a spot of Bachmann Turner Overdrive.

Ask them about flat back fours and they ‘ll think your referring to antiquated golfing trousers.

And as for the growing legend that is RVP, Iain will simply tut at the sloppiness and insert an S between the R and the V.

I’m off to the bookies.