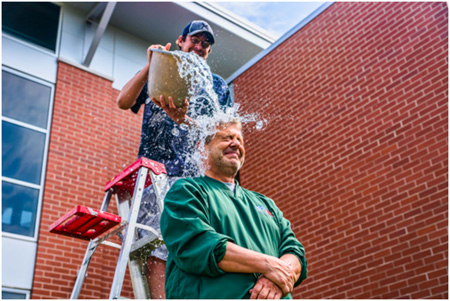 In Scotland we have an expression that bids bonjour to clement weather.  (To put this into context that can mean anything in excess of 17 degrees Celsius.)

‘Taps aff’, means ‘tops off’ and is reserved exclusively for the pasty abdomened males of the species. It, literally, requires the participants to take off their top layer of clothing, thereby exposing their skin to the wan sun.

Of late there has been a lot of ‘taps aff’ activity on the streets of Scotland and, in fact, the world over.  That’s because a phenomenon known as the Ice Bucket Challenge has swept the globe with Scotland no less in its thrall than anywhere else.

It’s a phenomenal phenomenon, in marketing terms, and deserves all the praise it is receiving because a tiny US charity, ALS, has come up with one of the most original, engaging, viral and downright fun marketing ideas of recent times.

You’ll have seen it, how could you not have if you have consumed any media whatsoever in the last month, so no need to describe it here.

What we at 60 Watt admire about it is the sheer simplicity of the idea (belying the underlying fact that a dose of ice cold water actually replicates some of the symptoms of the disease – Motor Neuron Disease as it’s known in Scotland).

It’s had its critics, many fierce – Macmillan Cancer Care has appropriated the idea for instance – but ALS has openly stated it is happy for ANY charity to benefit from the idea – but it has had a profound effect on ALS’ coffers, raising over $80m dollars at the time of writing, for what is, or was, a microscopic charity in the greater scheme of things.

In fact, better than that, here’s Pete demonstrating how it works.  (Thankfully with his tap oan.)