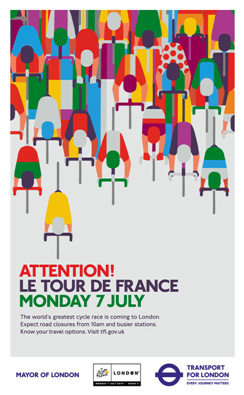 You might be surprised to learn that 60 Watt has some MAMIL tendencies (Middle Aged Men In Lycra); not all of us, mind you.

As Britain’s least desirable fashion movement has grown in momentum over the past few years at least one of our rotund team has squeezed disgracefully into his XXL Spandex and mounted a shoogly carbon framed Road Bike in a futile effort to gain a Ronaldo-esque physique.

So, imagine our delight when we stumbled about Transport For London’s gorgeous (and there can be no other word for it) Tour de France cycling campaign by M&C Saatchi’s Mark Goodwin and Grant Parker to announce the arrival of Le Tour in our capital.

It’s something of a retro affair, sporting the best illustration we’ve seen since, those glorious days of Norman Wilkinson’s train travel posters that so graced our highways and byways.  What’s more, one of them sports no fewer than six of the client’s logos without causing the least bit offence.

So, take a bow Adrian Johnson. You do a grand job at your easel.

Oh, and any chance we could have a framed set please guys? 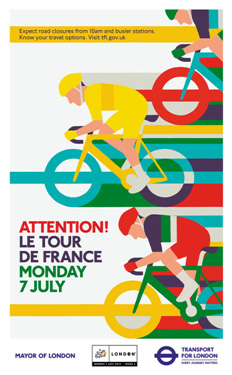