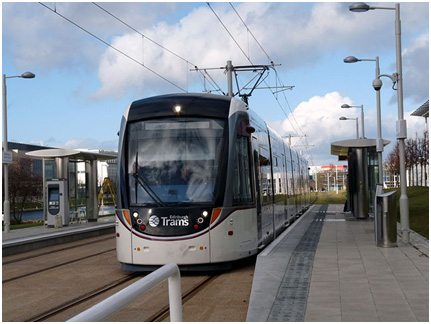 If you are a resident of, or have passed through, Edinburgh at any point in the last seven years you’ll have heard this expression countless times.

For some it has become the modern day ‘disgrace of Edinburgh’ as the initial estimate of a £375m construction bill has steadily escalated into a final bill of over £1bn and with a truncated route to boot.

It’s been an issue very close to 60 Watt’s heart as the line passes our front door; literally.

And it’s rather agitated some of our neighbours, not least our immediate street-fellows, Copymade, a print firm that has built up something of a cult following (particularly among the local constabulary) for the homespun charm of their heartfelt marketing.

Their “egg a tram” campaign raised the ire of our city’s Lord Provost (our Mayor to all intent and purpose). 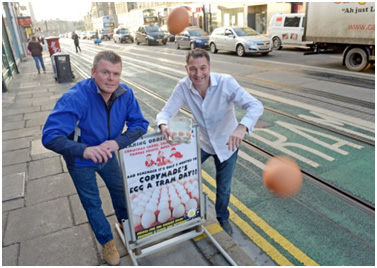 But we have to say the ‘kerning’ of the type leaves a little to be desired and if it’s puns that turn you on you can eschew the charms of 60 Watt and opt instead for Copymade’s ‘Silence of the Trams’ , ‘Tramspotting’, ‘Plans, Trams and Imbeciles’ and this little peach;  ‘Franks for Nowt!!!’ With its over reliance on the humble exclamation mark. 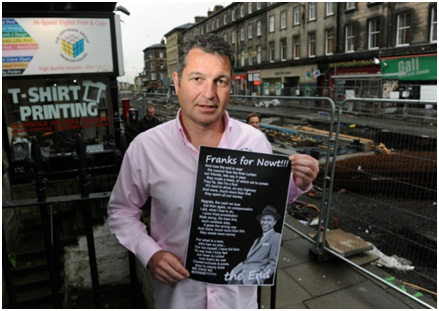 However, Copymade and 60Watt’s agony is now over as the construction work is finally complete.  In fact we are about to be the beneficiaries of a bit of a street-front makeover and the trams are set to trundle silently by sooner than you can say ‘Council tax rise’.